A tale of two cultures

In the middle of New Mexico is the Salinas Pueblo Missions National Monument.  Three sites here show a glimpse of a unique time in history.  A time entrenched with cultural change, conflict and struggles.  The now abandoned sites stand as reminders of the Spanish and Pueblo People’s early encounters.  The first Spanish explorers were thought be come to this area in the late 1500’s and the three Missions were built in the 1620’s.  In the eastern United States, the early 1800’s are ‘old’, but these ruins were built 200 years before that. 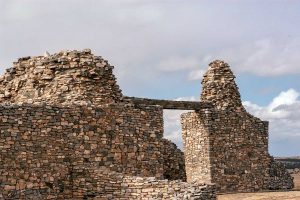