Alaska is our largest State, yet has the lowest population of all.  It is truly ‘the last wilderness’, filled with abundant wildlife, vast forests and massive mountains.  We are drawn to it’s very nature and hope one day, to return.

From Tok to Anchorage, Seward to Fairbanks

When driving to Alaska, you must pass through Tok, a small town just across the Canadian border and into Alaska.  We traveled from there through the state to Anchorage, visiting Denali to the north and south to Seward for a few days, then back to Denali and north to Fairbanks, before heading back through Canada, and home.

Even though we spent two weeks in this awesome place, it is clear that we just ‘touched the tip of the iceberg’, shall we say?  A return journey is a must for a longer period of time!  There is just so much to see! 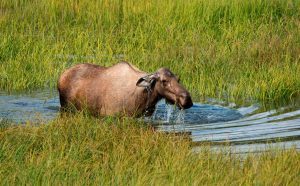 Denali….at 20,320′ above sea level, is the highest mountain in North America.  It was originally named from the Tanana Athabaskan word meaning “the High One”, long before the Western settlers arrived.  The mountain was re-named in 1897 after then Presidential candidate, William McKinley, however it has always been known as Denali by Alaskans.  In 2015, all government documents came to reflect it’s true name, Denali.

The Denali National Park landscape is filled with vast stretches of plant life which provide extensive habitat for Caribou, Moose and Grizzly Bears as well as many other species of wildlife.  Truly a wondrous experience for us. 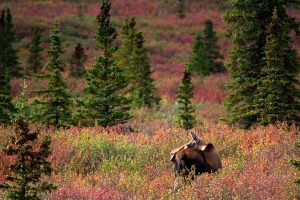 From the Harbor, Seaside and Seascapes

Seward is located at the head of Resurrection Bay and is the gateway to Kenai Fjords National Park.  It was named after President Lincoln’s Secretary of State, William K Seward in 1903, who was responsible for negotiating the purchase of Alaska from Russia in 1867, for a whopping $.02 per acre!

Seward is well known for its many attractions, from the Iditarod “0” point, to the Silver Salmon Fishing Derby to the famous Mt. Marathon Footrace.  Seward has a colorful history and a colorful and magnificent backdrop of mountains to Sea. 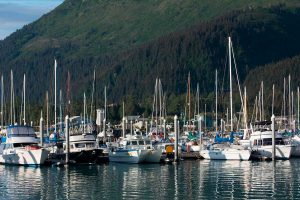