What is a Barn Door Star Tracker?

A Barn Door Star Tracker is a device to photograph the stars for much longer periods of time without ‘star trails’.  We have always been interested in photographing the night sky, but until we moved to Montana our night sky had so much light pollution that we just never did much with it.  Now being close to Glacier National Park, which is considered a ‘Dark Park’, we have been getting much more interested in night photography.  Some of you have seen my post on Facebook of the Milky Way and my post of the Northern Lights.  I know the Northern Lights are the Aurora Borealis, but I still call them the Northern Lights, so get over it!!!

Anyway, I decided to build a Barn Door Tracker.  I had a lot of scrap wood around my workshop, so I started putting one together.  The plans I used to make this are available here Type 4 Barn Door Tracker if you are interested in building one.  The plans are for one using a wheel to turn manually, but I modified the plans, as you will see, to use a 1 rpm gear motor.  These motors are rather inexpensive as I paid about $12 for this one.  Turned out to be an interesting project and now I am trying to see how well I did……. 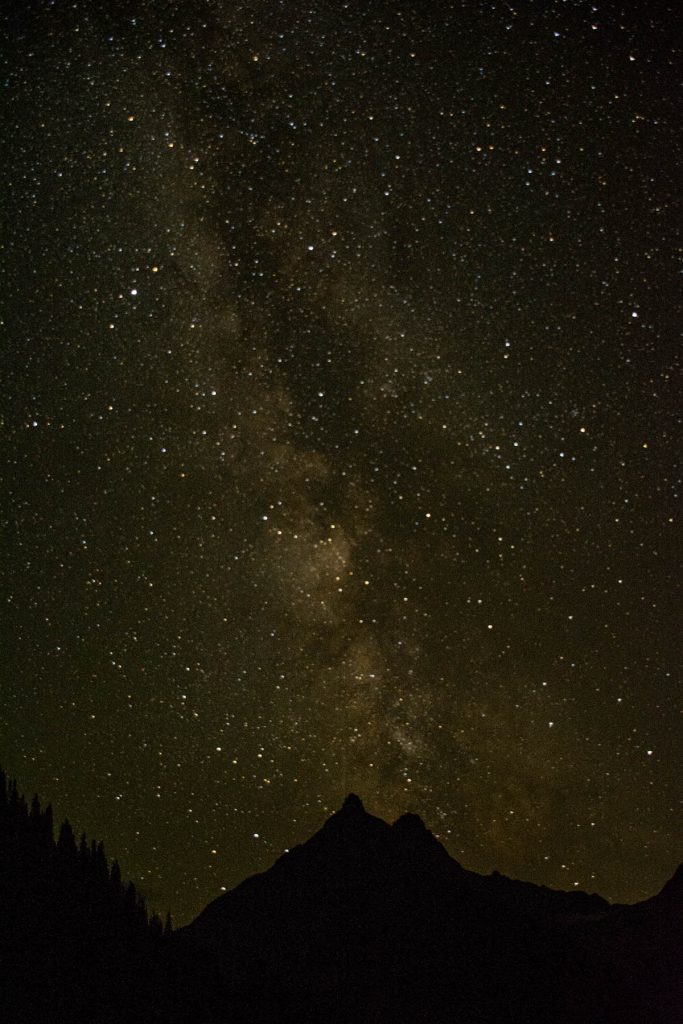 As you can see by the next photos, our interest in night photography has grown by leaps and bounds, as they say.  This is a photo of the Milky Way that I took in Glacier National Park.  This photo was taken from the Going to the Sun Road.  Mount Oberlin is silhouetted in this photo. 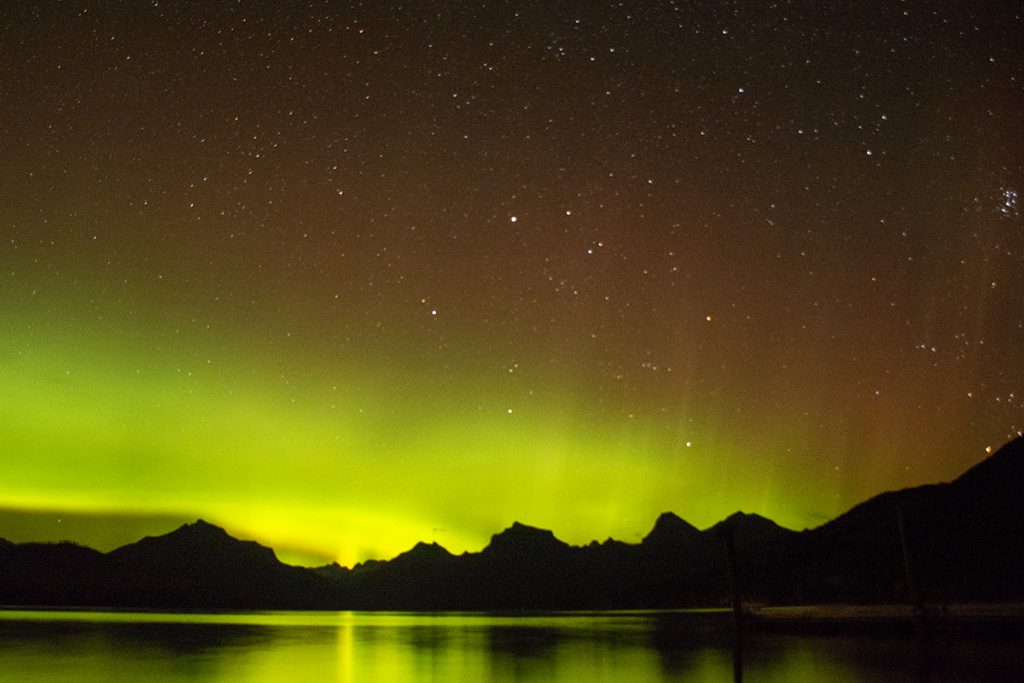 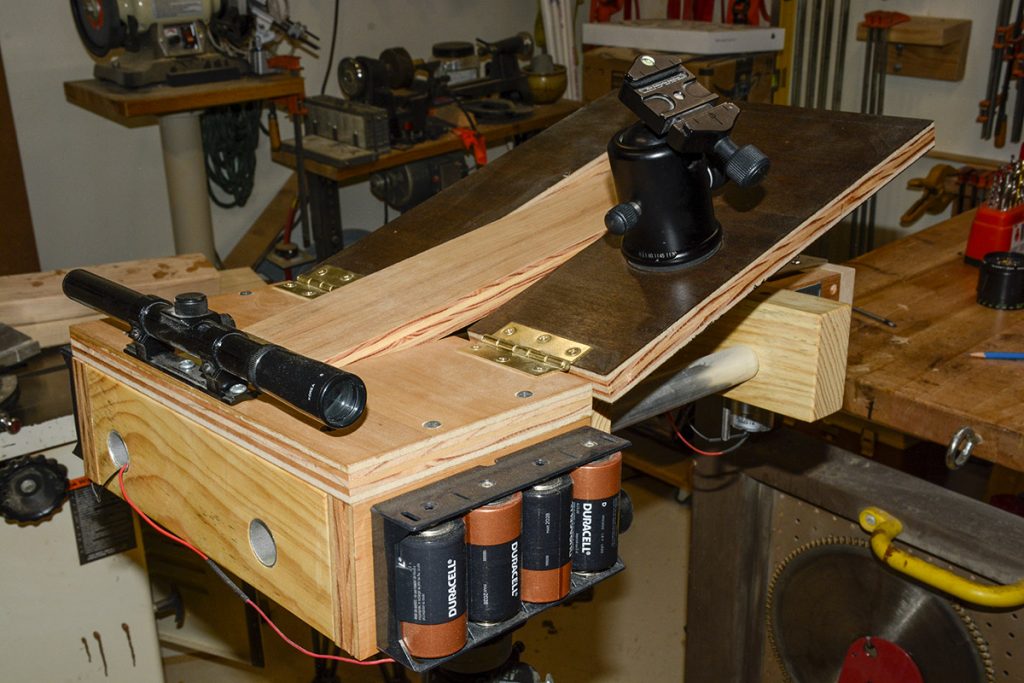 So this is what a Type 4 Barn Door Star Tracker looks like.  This is a design by Dave Trott, who has done an enormous amount of research on these projects.  I did make a few changes that does not make any difference in the operation of the device, but by using scrap wood and things I had in the shop, it made it much less expensive.  The Batteries make it portable, at first I thought I would us the 12 volts from the Car, but that would have limited me to locations I might not like.  I added the Telescope, one I had bought for $9.95 many years ago and never used, to help align to the North Star. 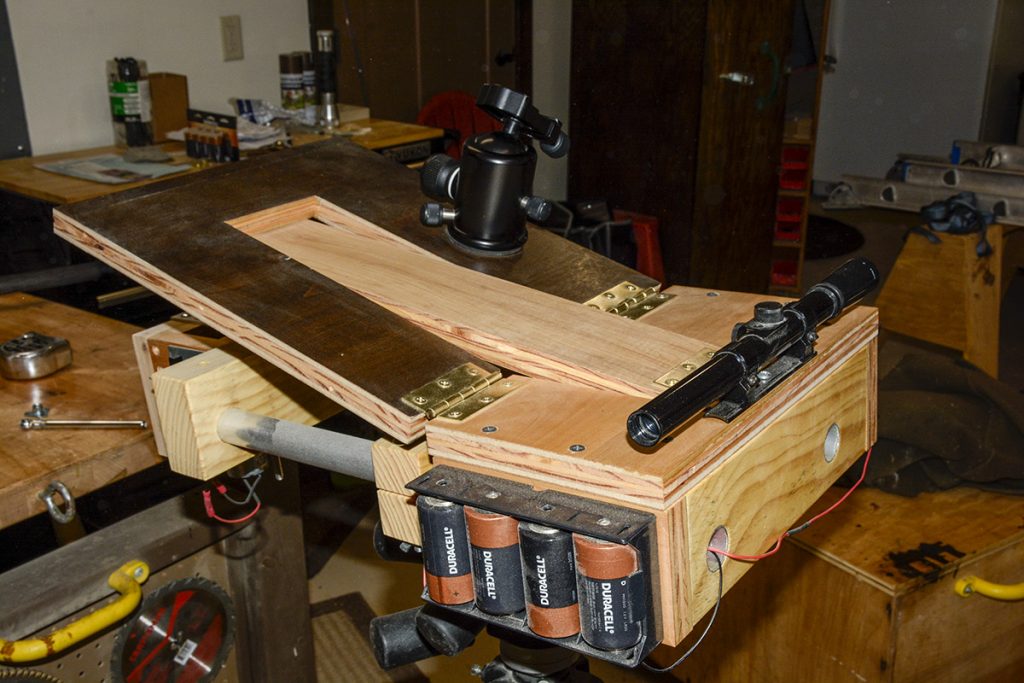 The other 4 batteries are on this side, 8 batteries to give me 12 volts.  I used ‘D’ Cells in order to be able to expose longer.  Although I don’t often stay out past 1:00 am doing this as I need my ‘beauty’ sleep! 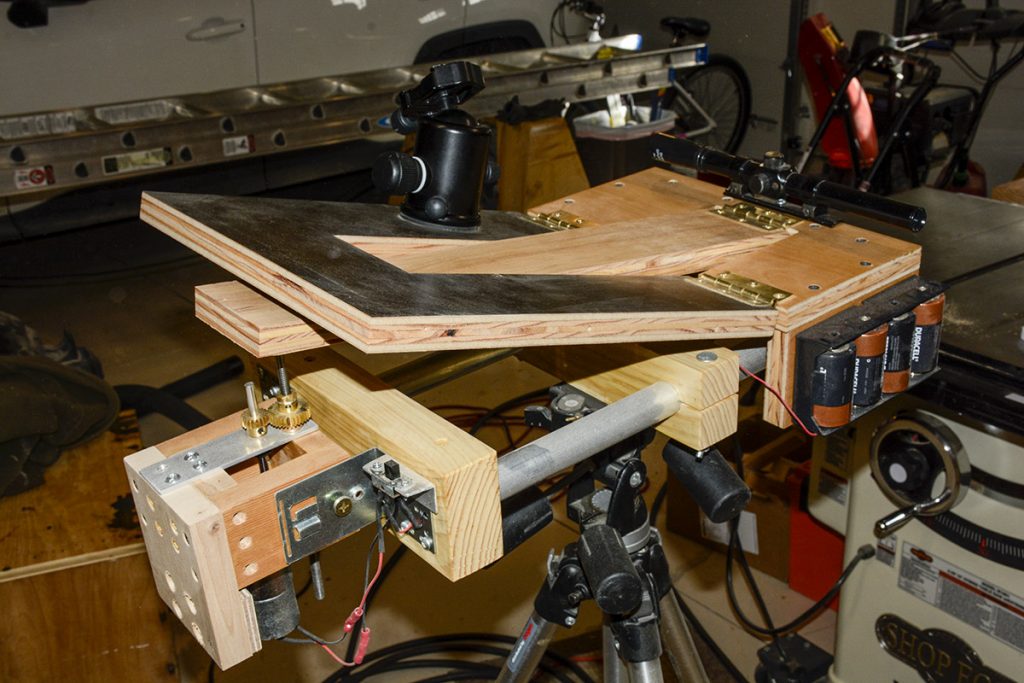 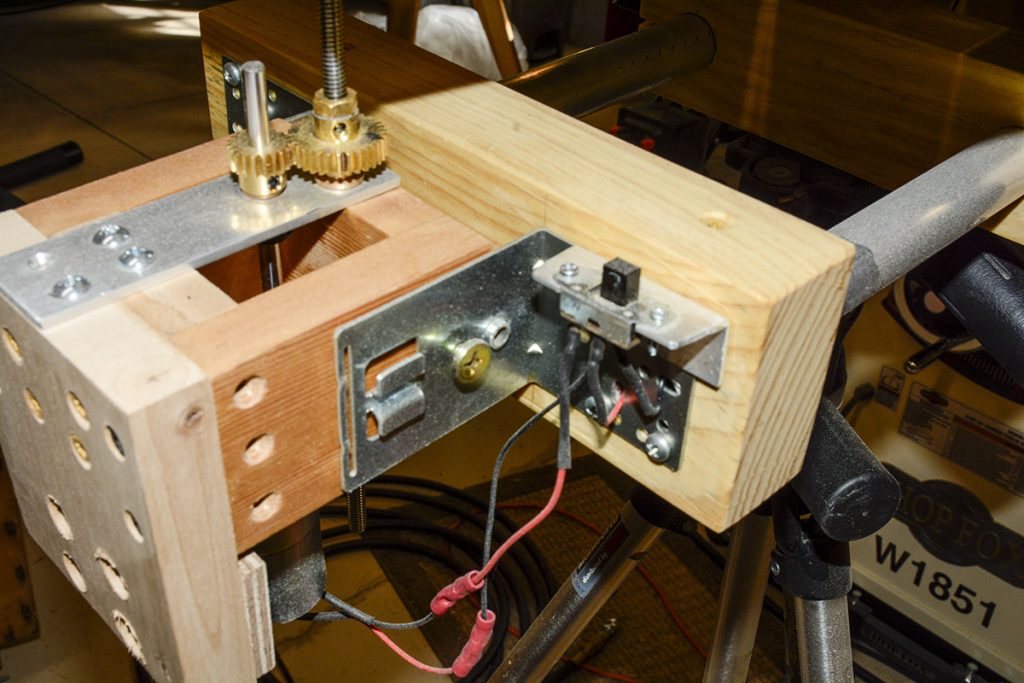 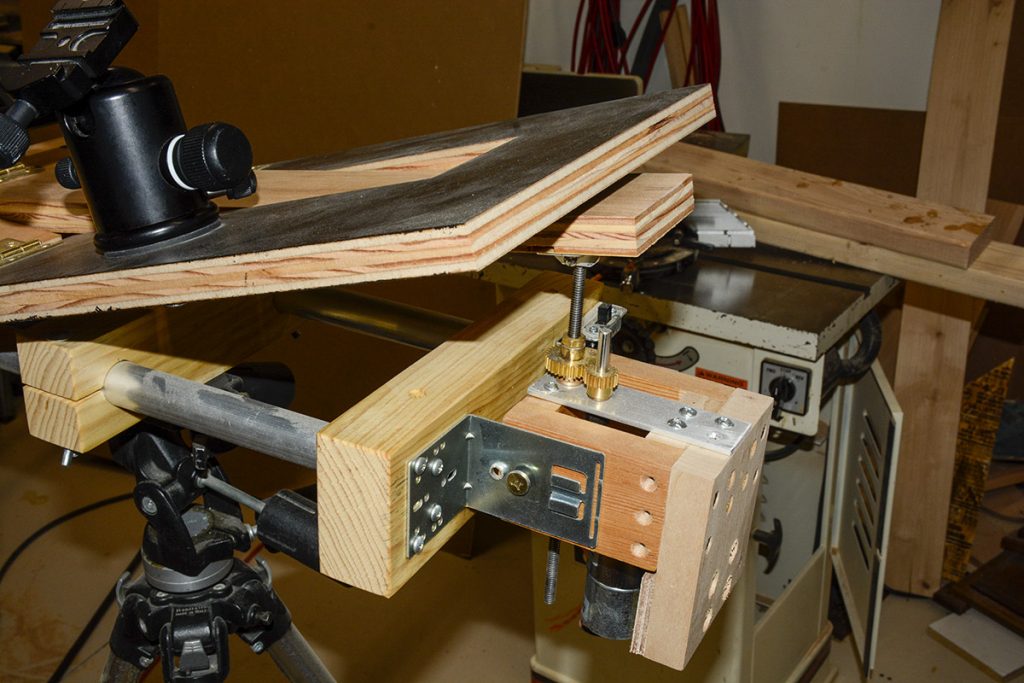 We have an old aluminum tripod that I mounted this on to make it easier to work with.  That way I don’t have to change it back and forth with my Camera.  I am NOT lazy, I just wanted to be able to use my tripod and camera elsewhere while this thingy was doing it’s thing. 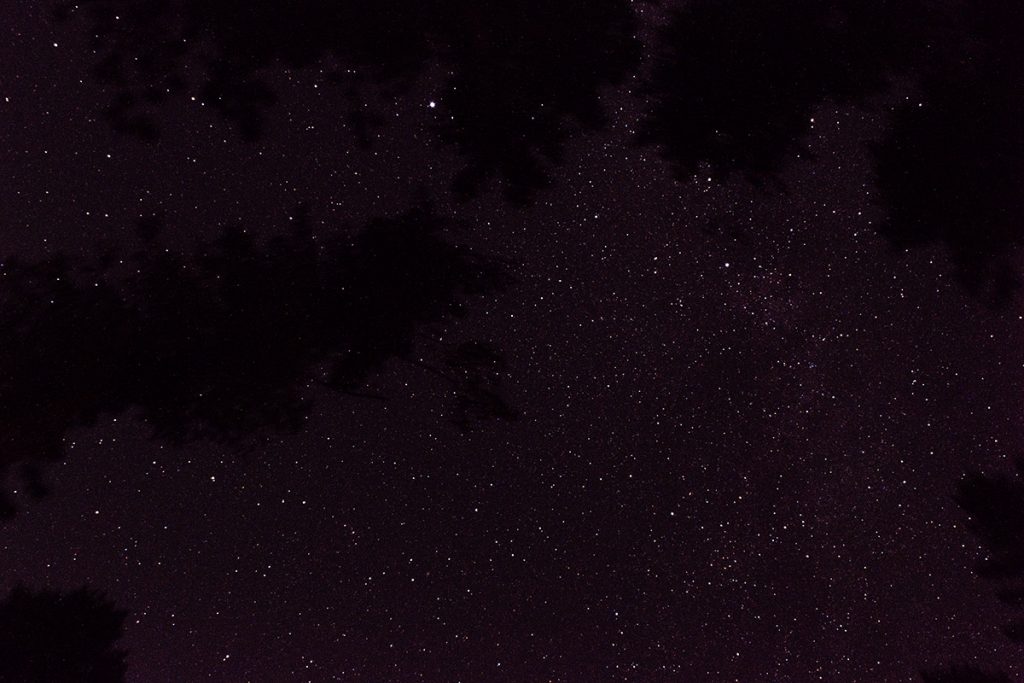 This photo shows my first experiments with the Barn Door Star Tracker.  This photo was taken at 4 minutes out in my driveway looking straight up through the trees.  Lots of light pollution in my neighborhood but the photo does not show any star trails.  When we photograph with our Cameras in Glacier National Park (as the first photo) we can only keep the shutter open for about 15 to 20 seconds before we start getting star trails.  At 30 seconds we begin to get oblong stars……..  Can’t wait until I get a clear night to go out to Glacier and try some 8 minute or more exposures!!!

If you get the urge to build yourself a Barn Door Star Tracker, I highly recommend this one.  If you have any questions that I might be able to help you with, please Contact Me !!!